All you need to know about CircleCI 2.0 with Firebase Test Lab 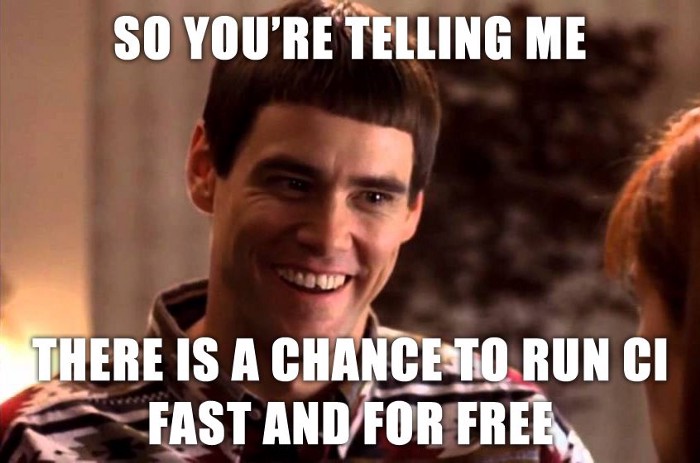 For Android developers, the one major issue with CircleCI 1.0 is speed. Don’t get me wrong. I enjoyed the free services offered by CircleCI. And from my experience, it is not slower than its competitors. But it is definitely slower than my personal computer.

I have tried to speed up my Android builds with the help of the official tips. No luck. For every build, we have to download the latest Android tools and dependencies. This process is slow in the most of the time, and sometimes the network connection of your container randomly drops, breaking your builds. It does reduce a bit the build time with the help of parallelism, but still at least 50% of the build time are wasted for downloading Android dependencies.

CircleCI 2.0 comes with many great features that promise to solve the problems with its predecessor.

Native docker support: We no longer have to wait to download Android dependencies for each build. CircleCI offers pre-configured Docker images with the latest Android tools installed. You can even use a custom image if you need to.

Workflow support: Workflow is similar to parallelism, but better. You define sub-tasks of your build task, tell CircleCI the dependencies between these tasks, and it will run all independent tasks in parallel and as soon as possible, as long as idle containers are available.

Yet, CircleCI 2.0 solves only part of the problem that Android developers complain.

What about instrumented testing?

Running instrumented tests on emulators in CircleCI 1.0 containers is known to be painfully slow. What’s worse, it is the same for CircleCI 2.0. It is because x86 emulators are not supported on CircleCI, and running ARM emulators is way too slow to be useful. Firebase Test Lab offers both real and emulated devices for running instrumented tests but it could be hard to integrate CircleCI with Firebase Test Lab because of the lack of detailed documentation.

The official integration guide from Firebase is for Jenkins CI only, while the the guide from CircleCI is for 1.0. Here I will show you how to run fast Android tests on Firebase Test Lab with CircleCI 2.0 with an working example on GitHub.

From my experience, it is easier to create a CircleCI 2.0 script from scratch and iterate than to migrate from an existing CircleCI 1.0 script. As a prerequisite, you should be able to run this minimal CircleCI 2.0 Android build script for your project.

First, let’s define what tasks we need to do build fast on CircleCI. Here is the skeleton of our build script:

The workflow of the above tasks is illustrated below. Tasks, build_debug, build_release and test_unit, are executed in parallel, while the rest of the tasks will run as soon as they are ready. 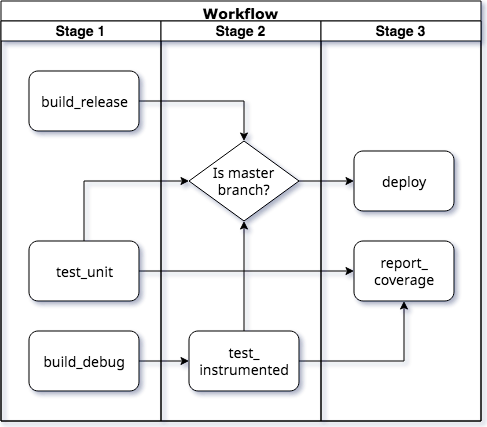 I will use my open source project as an example. The complete YAML file is available here.

We need to assemble at least two builds, debug and release. Some may need builds of different flavors but the task definition is similar. The snippet below shows you how to define a task for assembleDebug.

The first thing a task does is to define what Docker image the task will run on. As we will use the same Docker image for different tasks, it is better to define the image configurations in references section.

&android_config refers to the publicly available Docker image provided by CircleCI. It has the latest Android tools and dependencies installed so this is a great time saver.

Tip 1: Use a dumb terminal to avoid weird output from Gradle.

Tip 2: Explicitly limit the JVM heap size to prevent your container from running out of memory. For free users, each container has 4GB memory available.

We run androidDependencies task to download, if not cached, all project dependencies and save them to cache, shared by all containers. A typical cache key should look like this:

The value of the cache key should change if any of the project dependencies changes.

One should never commit any secret keys to a public Git repository. Instead, you should store your encoded keys as CircleCI environment variables and decode them in your container when needed.

To export CircleCI environment variables to the bash shell of your container:

In this step, we need to build two APKs, one debug build for unit testing and one for Espresso instrumented testing.

For debug build, only the output APKs are needed in later stages. For release build, we need to persist more files. For instance, mapping.txt generated by ProGuard is required when we upload the APK to Crashlytics Beta in the deploy task. So we simply persist the entire /build directory.

This step is optional but highly recommended. We store the output APKs as CircleCI artifacts so that we can download them from CircleCI when the task completes. This is handy for other developers in your team to test your APK without building it themselves or asking you to send it to them. Moreover, it is generally recommended to build APKs on a dedicated environment instead of the developer’s machines, which could be unstable and tend to change frequently.

We will skip test_unit task as it is almost identical to build_debug task. The main focus here is how to run instrumented tests on Firebase Test Lab through CircleCI.

A service account key is required for running tests on Firebase Test Lab from CircleCI. You have to create one if it is not already created, download the secret key, (Base64) encode it, and save it as a CircleCI environment variable. We will (Base64) decode it before we use gcloud command.

We need to set the default project on Firebase for every build because CircleCI provides us a clean environment to work on:

The we have to use our secret key to activate the service account:

Now, our gcloud command is authorized and we are ready to upload our APKs and run tests on Firebase Test Lab:

Firebase does not provide free users an easy way to know this ID. A workaround is to manually run a test on Firebase Test Lab once and have it generate the test results. It doesn’t matter if it is an instrumented test or Robo test. And it doesn’t matter if the test succeeds or fails. When the test completes, go to Firebase Console, click to view the details of the test. 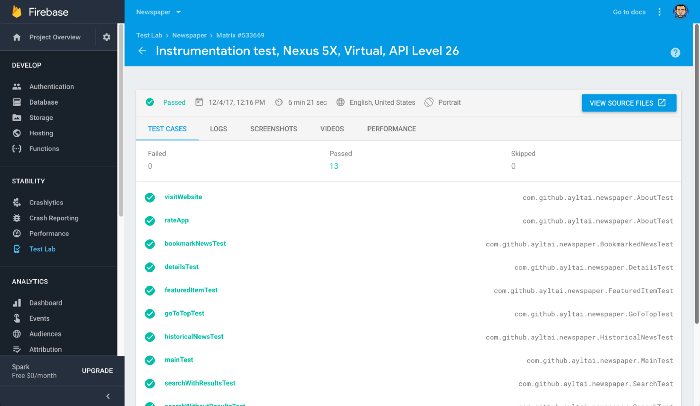 By clicking VIEW SOURCE FILES, it will open your Firebase Storage. The ID is in the URL:

Note your Firebase Storage ID and use it in the gsutil command above.

With both coverage reports at the correct paths, we can run jacocoTestReport to generate a XML report for other coverage analysis services, as well as a HTML report for human consumption.

The final step is to deploy the release APK. This is similar to build_debug task so I will skip it.

From my experience using CircleCI 2.0 with Firebase Test Lab, the build time of my sample open source project has been reduced from 30–45 minutes to 15–20 minutes, about 50% speed improvement and significant cost reduction.

There is one caveat though: in CircleCI 2.0, running tasks cannot be automatically canceled by a Git push to the same branch. If you are on a paid plan, and you do Git push very frequently, it may end up costing you more than CircleCI 1.0.